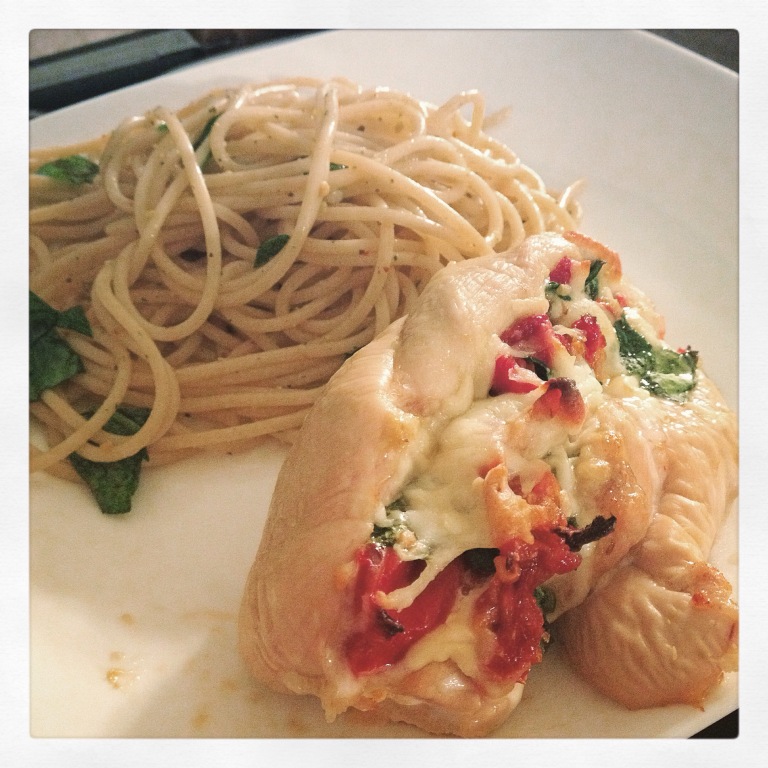 I must say, I’m sooooo proud of my boyfriend for this one. While I worked on Sunday, he was home and so had the task of making dinner (again). This dish seemed simple enough to make without me, plus I didn’t want to slice the chicken open, so I left this dish for him. As you can clearly see, our dinner came out amazing! Though since he’s become obsessed with tracking the Instagram posts of his dinners, I wonder how much he tries to make us a yummy dinner and how much he just does it for the likes 😉

This was one of the prettiest dinners we’ve had in awhile. All the different colours look great together and taste even better! Since I accidentally used more chicken in the Harvest Soup than I’d intended, we each only got one chicken breast for this meal, so I suggested adding pasta as a spontaneous side. Gotta make do with what you have in the house! The only complaint I have about this one is the cheese. Even though there was a lot, mozzarella doesn’t taste very strong so it was a bit bland. If I’d had Parmesan in the house, that would’ve been better. Otherwise, a juicy and tasty meal!

One thought on “Stuffed Chicken Breast with Garlic Herb Spaghetti ”